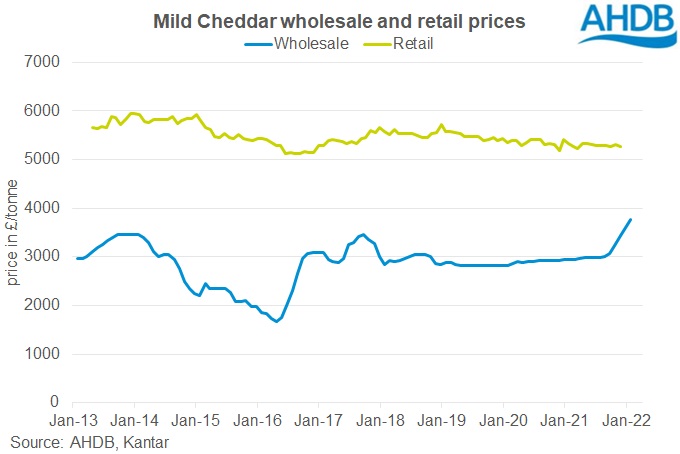 Wholesale dairy prices in the UK have risen sharply in recent months and market momentum should keep them buoyant, at least in the short term. But will this translate into higher consumer prices?

If we take retail and wholesale prices for Mild Cheddar as an example, we can see that historically the retail price is much more stable than the wholesale price:

Prior to the recent price hike, the wholesale mild cheddar market had been stable for some time. In November 2018, the margin between wholesale and retail prices was £2,695/t. By July 2021 it had shrunk from just £385 to £2,310/t, partly due to a slight increase in the wholesale price and also a gradual decline in the retail price. However, in November 2021 (the most recent month for which we have retail data), a sharp rise in the Cheddar wholesale price meant the margin had shrunk from £490 to £1,820/t in just 4 month. Assuming the retail price remains unchanged for January, the margin will be just £1,500 per tonne, the smallest it has been on our records – dating back nine years.

It’s not as simple as saying that because wholesale prices have gone up, retail prices should go up as well. Most retail purchases are made on long-term contracts, rather than spot prices. However, when spot price increases are sustained, processors will understandably compare the returns they can obtain through different market channels. In other words, spot prices will influence contract prices when trading. On the other hand, the average retail price is based on what is paid by buyers. If retailer prices rise, some shoppers tend to opt for cheaper products, resulting in less fluctuation in the overall average price.

With the upward pressure coming from all these different aspects, it becomes more and more likely that retailers will have to raise their prices. But the pressure to control consumer price inflation will fight against this, making it a key point of vigilance in the months to come.